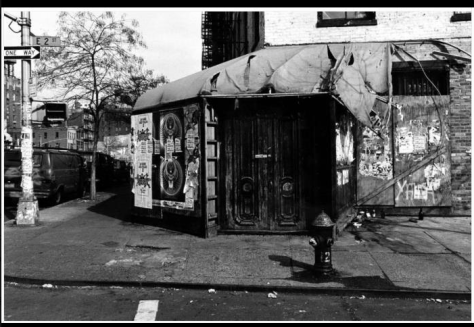 I once got into a fight outside the Tin Palace in 1975 when I was a cab driver.

But he hit me first.

It was about four o’clock on a hot summer afternoon and I was headed up the east side of Sixth Avenue when a young man came dashing toward the street waving his arms frantically. Usually, when someone is too anxious to hail a cab, it can be trouble. Heedless of trouble, I pulled over. He got in the back seat. I pulled away from the curb.

I had been driving a cab in New York City long enough to know that there was no right turn for a few blocks and continued driving casually up the avenue.

“Really….where would you like to go?”, I asked again.

He said the Tin Palace.

I knew where that was and in about eight minutes we were there. I looked at the meter. It was $1.65. He got out without paying and started for the door. I threw it in park and got right out and went after him.

“Aren’t you forgetting something?”, I asked him.

“What are you talking about?” he said.

“We had a bet coming across town and YOU lost….”

We stepped out of the doorway onto the sidewalk and I asked his name.

He handed me a dollar.

He took out another dollar and said, “I’ll match you for it.”

I just looked at him in exasperation. He threw the dollar bill onto the ground and then he said, “Pick it up.”

I was beginning to lose patience. “No….YOU pick it up”, I told him.

I reached out and grasped his sleeve with my right hand and gently but firmly tugged his arm in the direction of the money. Then, with his left arm, he swung and hit me in the face with his fist. I backed away from him and assumed a fighting pose.

He did the same.

He was standing there with his fists clenched and holding them in front of his chest.

“I could kick this guy in the balls and it would all be over”, I thought.

But being a nice guy, I decided to kick him in the stomach instead. ( I wore combat boots in those days). He grasped his stomach and doubled over. I rushed toward him and grabbed him with both hands and slammed him into the side of the cab.

I took a couple of steps back and then rushed forward and kicked him as hard as I could in the side. That’s when I noticed all the faces in the window. They had been watching. I always liked having an audience.

I decided to get back into my cab and drive away when I noticed his wallet lying on the ground.

I picked it up and threw it as hard as I could.

It landed in the middle of the street about fifty feet in front of my cab. The engine was still running. He got up and stumbled toward his wallet. Just as he was about to pick it up, I jumped back in my cab and stomped on the accelerator.

Then I screeched to a halt, my bumper and headllight just a foot from his face. He was on his knees.

Before driving off, I spoke to him through the open window. “Don’t EVER mess with a cab driver.”

I still have that last dollar which is stretched and ripped in half.