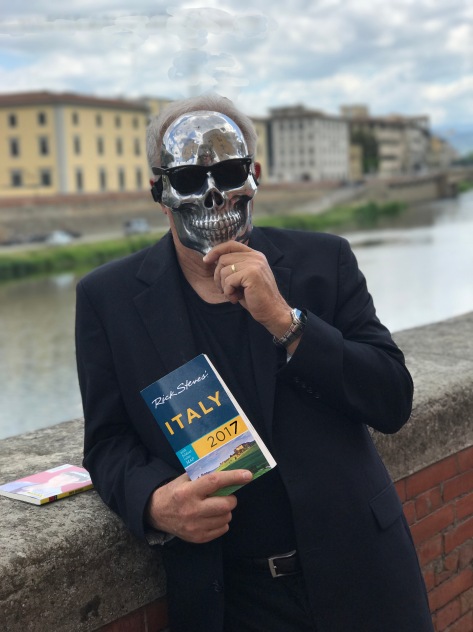 I promised the dead man’s grand-daughter before I married her that I would take her to Italy if she would but marry me.

I just didn’t say when.

But after twenty-five years of waiting  it was she who finally took me there.

Indeed,  something of the old man remained in the little hilltop village to which we ventured.

Or rather something of the boy.

Something in the green tops of the tall pine trees or in the dark grey of the cobblestone streets or in the pale orange of the little town’s buildings in the late afternoon sunlight. There was something of him in each of the big wooden doors along the streets–the ones with the big polished brass lion-headed knobs on them–or in between the louvers of the ancient wooden shutters through which old ladies with pale grey eyes peered at their world from darkened rooms which bore the scent of candles.

His two cousins, two little brothers who were a few years younger than he was, had already died–first one, and then the other. No doubt he worried he would be next.

He was just fourteen when he awakened before dawn one morning in the little house next to the castle. He packed his small suitcase and had a little something to eat and a little more to take with him wrapped in white paper. It was from his mother. His father may have given him a little money for his pocket that day in case he needed it on his long journey to America.

No doubt he hurried down to the town square where now old people, the ones who were not yet born, but whose grandparents may very well have seen the boy hop onto the back of a wagon for the long winding ride down the mountain to the town where he would catch the train to the big boat which would take him to the even bigger boat that would take him to America.

He was never to see either of his parents again, except in his dreams.

But they would write to him– and he to them and in time, they would come to lie side-by-side in that same little town with its steep, cobblestoned streets and their sad, worn faces still gaze out at those same mountain vistas through porcelain eyes on small oval plaques attached to white marble slabs in the little cemetery, their final resting place.

He made his way to Maine and grew up lean and strong and tanned. He set big explosions with dynamite and sold the Feldspar and other minerals he mined to the government.

He married a woman from this new land they called Maine. On Summer evenings he would sit on his porch by the side of the main road and play his banjo and his mandolin and drink home-made wine and sing with his friends until it was time for bed and sometimes until after it was time for bed.

His wife, a dark-haired beauty bore him three fine children. His eldest son worked with him in the mine and the younger one went off to Maine’s biggest city to find work while his daughter, with her beautiful eyes and long black hair married a young man from the merchant marine academy and had children of her own.

They said that the boy who became a man came back to his little town only once many years later, long after his children had children of their own, no one is sure exactly when. What is certain is that he was greeted with kisses on both cheeks by the men and women of that town as is their custom to this very day.

Afterward, he went back to Maine and worked in his mine and sold his Feldspar and sat on his porch and played his music and laughed and sang with his friends, just as he always had and in time his children grew up and would bring their children to see him.

They would look at his dark hair, which was unusual for an old man and sometimes they would fall asleep in the bedroom next to the porch listening to his singing . And then he would lay down his banjo and he would lie down next to the woman with the long black hair from Maine.

And he would dream of a land far away where mountains hid behind other mountains and where cows wandered back home for miles each evening through thick forests and where the laughter of children and the voices of the townspeople greeted one another like music echoing down the winding streets and fell softly on the pink ears of the old men sitting on benches in the late afternoon sun.