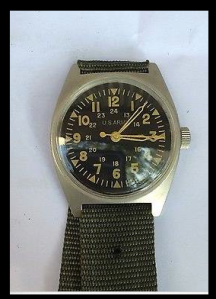 I think my base salary as a private E-1, was $17.50 a month, always paid in cash, plus, of course, complimentary room, board, clothing and medical.
And burial insurance.
One of the first things we had been told after being inducted, was that each soldier is entitled to a free military funeral with full military honors.
You can’t imagine what a relief that was to hear.

One fine Spring day, probably a Saturday, as a kind of reward, and after we’d been in the army long enough to earn our first paycheck, we were marched to the PX. In civilian language, that stands for Post Exchange. The army store. While some guys stocked up on cigarettes (19 cents a pack/$1.50 a carton), I, myself, not being a smoker, looked around for something a little more substantial to spend my money on.

I came to a glass case, and inside I saw a watch. Not just any watch.
The body of this particular watch was cut from dark grey metal and it had an olive drab wristband. The face of the watch–or dial, was black with phosphorescent-coated minute and hour hands and numerals, and a sweep second hand with a phosphorescent tip that you could actually see in the dark.
I wanted that watch very much, because I knew, months later, when I was on patrol in the jungles of Vietnam at night , and I got shot and mortally wounded, I would be able to glance down at my useless arm and ascertain precisely what time the unfortunate incident occurred. The one in the glass case turned out to be a display model, but I placed my order, paid $33.00, the equivalent of two months salary and was assured it would be mailed to me.

Fort Stewart is located in a large, sprawling wilderness area comprising thousands of square miles in South Georgia. Two weeks later, toward the end of our basic training we were on a field exercise, miles from the base, in the middle of nowhere, when I was unexpectedly called out of training by one of the sergeants. It seems there was an important telegram waiting for me back at headquarters.

A jeep and driver had even been dispatched to fetch me back to get it. Getting a telegram in those days was a pretty big deal and the kind of thing that only happened when some awful event had occurred.
As the driver sped down the two lane road with me sitting in the Jeep, I wondered what awful calamity had taken place. I was an only child, and all four of my grandparents had long since passed away, so the only possible explanation was that something terrible had happened to my parents. Perhaps our house had burned down or maybe they had been killed in a car accident.
They did seem to go to a lot of places by car.
That seemed to be the most likely explanation. It didn’t help that the jeep driver didn’t say a single word to me during the entire hour it took to drive back to the army base. He probably knew I was in mourning and didn’t want to intrude on my solitude.
The prospect of losing my parents in a fire or a car accident, filled me with a deep anxiety and I’m sure the driver of the jeep would have been worried about me, had he bothered to glance over at me. But he just inhaled deeply on his cigarette and kept his thoughts to himself as he drove. Each smoky exhalation seemed to reinforce the hopeless of the situation.  I thought, he has probably had done this many times before, he knows something bad had happened, so he just drives on silently down the road toward headquarters. Thousands of tall pine trees stood silently and respectfully along the side of the road as our little vehicle sped by. They somehow knew what was in that telegram.
A hour or so later, I arrived at headquarters and was handed the telegram by the CQ (Clerk in Charge of Quarters).
With a heavy heart, I opened it.
My watch had arrived at the PX.