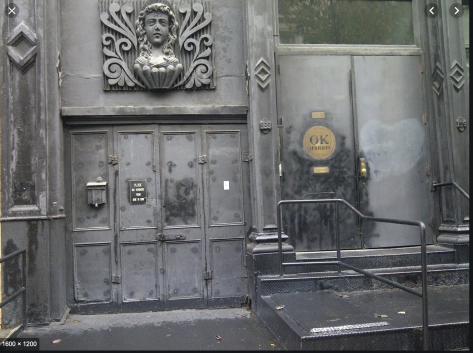 When I was a young artist and new in New York, the thing to do was to take slides of your artwork to the O.K.Harris Gallery on West Broadway and show them to Ivan Karp. I had already been in a group show at the Hundred Acres Gallery which Mr. Karp owned farther up the street . It was run by his protege, Barbara Toll, a brilliant young woman who later owned her own Gallery in Soho, so I was feeling pretty sure about myself.

In those days, my “artwork” consisted of a succession or series of arrangements of common and ordinary– or found objects, which I combined in new and interesting ways and then placed inside a small box and exhibited it in the window of my storefront art studio on Grand Street. These “assemblages,” as I later found out they were called, suggested a brand new sense of order– while remaining quite open to interpretation, being generally humorous and not easily explained.

One Saturday afternoon, I stood in a long line of eager young artists as Mr. Karp, who had discovered Andy Warhol and a number of other influential artists, sat in a comfortable chair inside his gallery and issued opinions about each artist’s work. To the attractive young woman ahead of me, Mr. Karp patiently and in good faith looked at her artwork and then told her in a matter-of-fact way, “Your work is alien to my consciousness.” She stepped back into the real world tentatively, and with a puzzled expression on her pretty face.

Then I was my turn.

I handed five or six of my slides in their plastic sleeve to Mr. Karp, who held them up toward one of several track lights pointed in our direction.

“There are several galleries in New York that would be interested in your work”, he declared matter-of-factly. A few others standing in line behind me inhaled deeply and shifted their weight uncomfortably while waiting their turns.

I was actually shocked to hear him say this, as I really didn’t think of what I was doing as “art” –and had just gone to him with my slides because it seemed to be a right of passage— and others I knew had done it.

And it was free.

The first gallery he mentioned was The Monique Knowlton Gallery, and the name of one of the other galleries, now escapes me.  I just remember they were both prominent galleries on 57th Street. And although I am sure I must have gone to both of them and been rejected, I don’t remember what their comments about my artwork, were, if any.

The third gallery that Mr. Karp mentioned was The Ronald Feldman Gallery, uptown, near the Whitney Museum on Madison Avenue.

The way it worked was, you would drop off a sheet of a dozen or so 35mm color slides with the receptionist and come back in about a week and pick them up and go to the next gallery. Or if you were smart, or could afford it, which I couldn’t, you would have multiple sets of slides at various galleries at the same time.

After my slides had been at Ronald Feldman Fine Arts for a week, I was back at the receptionist’s desk. Because I wasn’t a famous artist yet.….I reminded the receptionist who I was and that I had dropped off my slides the previous week.

“Yes”, I heard a voice from somewhere inside me reply.

“Mr. Feldman wants to see you”, she informed me.

I instantly wished that I had dressed better as I was not expecting to meet anyone important that day.

She got up from behind her desk and walked around to where I was standing and said,

I was ushered through the exhibition space which was accessible to the public, and down a short hallway which was not, to an office with an open door where a well-dressed middle-aged gentleman was sitting behind an expensive-looking desk. He stopped what he was doing and stood up as we entered.

“Mr. Feldman, this is Richard Parker, the young man whose work you were interested in.”

Mr. Feldman sat back down behind his desk and held up the sheet of slides which his secretary had just handed him.

“This is very interesting, Mr. Parker…” I heard him say.

“These are somewhat reminiscent of the work of Joseph Cornell…” I absolutely loved the idea that this important art dealer was already comparing my work to that legendary artist’s work. I had first learned about Mr. Cornell’s work just a few years earlier from Dr. DeZurko, my ancient Art History professor at the University of Georgia . I could tell by the way Dr. DeZurko spoke in reverant tones of Cornell’s work as he flashed color slides on the screen that here was a very unusual artist. Not your ordinary Rembrandt or DaVinci.

Again, Mr. Feldman held my slides up to the light from his window looking out onto Madison Avenue and said, “I want you…. to come back here in 6 months…”

Not wanting to unnecessarily complicate a situation which I recognized was going extremely well, I simply thanked him and tried to get up out of my chair without banging my swollen head against the ceiling– or knocking over any prohibitively-expensive sculpture on the way out. I hoped the receptionist could not hear my heart pounding inside my chest as I headed out the door.

Once safely back out the street, I was overwhelmed by a feeling of euphoria. And while I generally felt good about myself as an artist,  I would hardly describe myself as typically euphoric.

My feet flew down the street as I hastily made my way back to the 72nd Street subway station and rode the “A” train back down to Canal Street and walked quickly up the stairs and back to my studio on Grand Street to resume doing my “interesting” Cornell-like artwork.

With renewed vigor and a new sense of purpose I literally worked like an artist possessed as I produced dozens of new pieces over the next six months (when I wasn’t spending my nights driving a taxi in Manhattan.)

Six months later, to the day, I was back up  at The Ronald Feldman Gallery to drop off my two new sheets of slides. I’ll admit I was feeling pretty-cocky as I handed my new artwork to his secretary.

And exactly one week later, I was back at the gallery to pick them up– and dressed much nicer this time. If Mr. Feldman was going to make me a big art star, I was going to have to look the part.

I was actually surprised when his secretary didn’t seem to remember me. Maybe it was the nice clothes. So as she looked at me as I stood there, I gently reminded her of who she was dealing with.

“Richard Parker”, I uttered in my most sincere and serious, yet non-chalant tone.

She immediately swivelled around in her chair, leaned down slightly and retrieved my slides and the manila envelope with my name on it and handed it back to me without a word.

Momentarily stunned by her silence and seeming lack of recognition, I asked meekly,