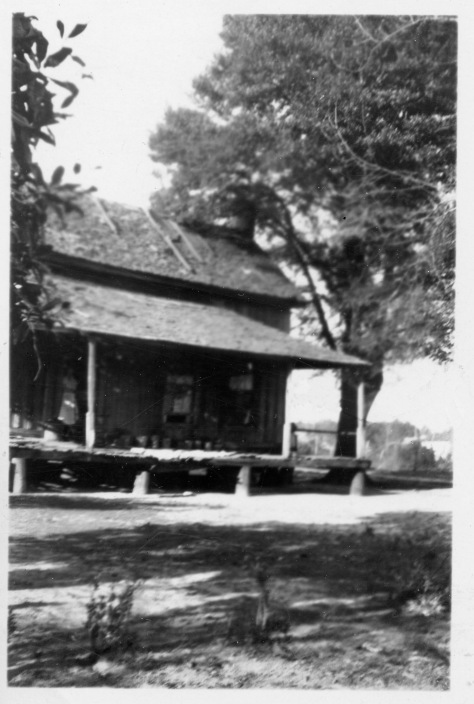 The house my father was born in on September 10, 1905. The last of four children and the only boy.

His Aunt, “Maggie”, who can be seen here on the porch continued to live in Nicholls until she died on August 5, 1963.

We went to visit her often when I was a child.

We’d always arrive at night and there were bales of tobacco on the front porch, and a player piano in the front room. She let me play it the next morning.

There was a swing out front that my Dad’s grandfather, had died in in 1912. He had ridden with the 7th South Carolina Cavalry when he was 16.

And there was a well out back with a bucket and a rope and the water was cool and tasted good.

Aunt Maggie lived alone after her husband, Mr. Daley, died, and their son Clarence didn’t come home from the war. She grew vegetables and corn and raised chickens and even let me feed them once.

It was exhilirating to see them all run around after the shells from the beans she gave me to feed them just to keep me occupied while she and my father talked about old times up on the front porch.

When she called me in for lunch, I was shocked when I saw the bucket with the chicken’s severed feet in it bound with twine.

After lunch, I got sleepy and took a nap on that old swing in the front yard under the Elderberry Tree and later on, put three pennies and a nickel on the railroad track which ran in front of the house and on down past the old blackwater swimming hole. A nickel was a lot of money in those days.

I waited and waited.

The train came by after a while, just as Aunt Maggie said it would, and flattened those pennies and made them the size of a quarter. I must have walked up and down that track a dozen times that day.

But I never did find that nickel.