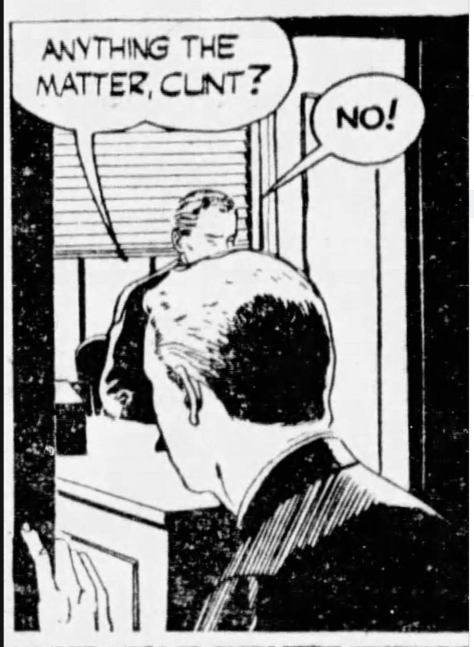 After I quit my staff job at Marvel and went over to Harvey Comics back in ’78-’79, I was lettering a Richie Rich comic and Richie and his butler, Cadbury, were playing outside their mansion in the snow.

In the story, Cadbury The Perfect Butler brushes off a snowflake which has landed on Richie’s shoulder.

I took it upon myself to add a sound effect to the action although none was called for in the script.

Right next to Cadbury’s white-gloved hand, I hand-lettered the word “FLICK” and did it in such a way that it could be seen either way.

A month or so later, when I was invited to return to my old job at Marvel, I got an irate phonecall from the editor at Harvey. (the great Sidney Jacobsen )

“Did you letter the word FLICK in one of my comic books??

“I cannot tell a lie,” I thought, remembering the story about George Washington and the Cherry Tree.

The editor then yelled at me over the phone so loudly that I could have heard his voice all the way to our office at 56th and Madison from his in the Gulf and Western Building.

Later on, Sid came to work at Marvel and I took it upon myself to act as his unofficial welcoming committee, introducing him to all of his new co-workers.

Once settled in, he continued to give me work, and though 40 years have passed, we are still friends to this very day, although we live on opposite sides of the country.

I have noticed that I often take things upon myself. Often this leads to trouble for me.

I’ve discovered that like to go out on a limb– to see how far I can go before it breaks. I even did that as a cartoon strip, but I don’t know what happened to it.

In the final panel, though, the limb did break.