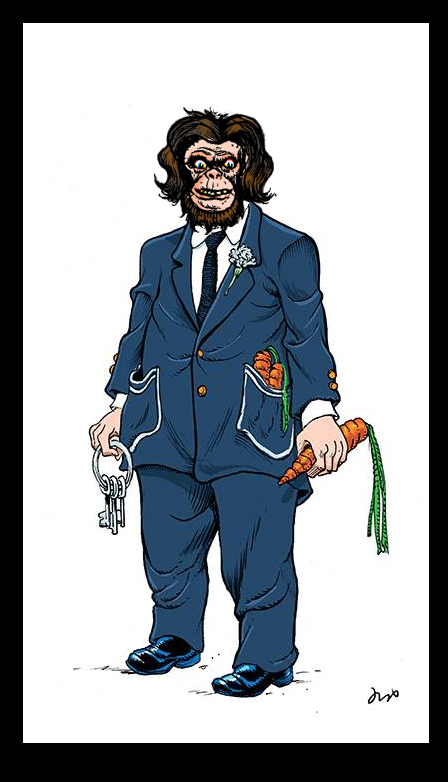 A few years ago, after sixty years of drawing pictures, and after moving to Maine, and faced with the reality of not having much paying work and with the children almost grown and the two of them becoming increasingly independent, and for wont of nothing better to do, I decided to finally confront an old nemesis I had been unconscioiusly carrying with me all these years.

Fear of drawing the human figure.

One nice thing about the graphic arts is that it is not like the performing arts. No one ever need see the artist’s mistakes, and in fact, in selecting examples of my work from the last three years for my recent exhibit, I burned many things I came across in my archives which for one reason or another displeased me, and I would not want anyone to see them as examples of my work.

I should say that I have never been one of those artists who feels that he has to have an idea in mind before starting to work. I think I have more in common with an explorer who sets sail for an unknown and faraway island with neither map nor compass to guide him. Confident that even though my small boat may spring a leak– or take on water– it will not sink. That I will sail on with my invisible crew, completely lost in the joy of sailing and somehow, every single time, I arrive at some beautiful destination, as if by magic, almost as if someone else had been piloting my vessel and I a mere stowaway.

So it was that with infinite vague images of humans in my head to guide me and with a seemingly endless supply of paper at hand, I sat down at my old wooden drawing table in the corner by the window and bravely touched the tip of my pencil to the nice smoothe surface of a fresh sheet of blank paper.

Several thousand drawings and a few years later I was beginning to understand how the skin stretched tight over a shoulder blade curved into a muscle in the back and how the bony structure of the skull underneath the eye socket can gradually over time become the sunken hollow of a once-youthful and oft-kissed cheek. Or how the calf muscle on the lower leg is slightly higher on the inside if you’re looking at the figure from the front and how the ankle bone is higher on the inside of the leg than it is on the the outside of the leg. In fact, the structure of the human body really does make a lot of sense from a practical point of view in addition to its incredible sensual beauty.

There are many good books on human anatomy and figure drawing and even more bad ones. But I am the type of artist who prefers to search for things hidden in darkness rather than placed in plain sight in sunlight. The mind fills in more interesting answers than the obvious ones.

So with an empty house at my disposal and a desire to see some of my recent efforts on the wall and anxious to share my new-found drawing skills with a new set of friends and a few old ones, I proceeded to buy up every cheap plastic frame that Walmart® could supply.

Going through thousands of drawings and trying to decide what to include in an exhibition like mine was easy. I chose drawings I’d done which I liked and burned others I didn’t. One hundred and seventy-five drawings was just the tip of the iceberg and I later discovered hundreds of others that could easily have been included had I had a bigger space for an exhibit.

Then came the embarrassing task of publicizing the event. And the agonizing task of who to invite and who not to invite. Would the nice old couple I spoke to every day who walked their dog past our house each evening really want to focus their gaze on a rotting zombie with an upraised butcher knife? “They’re my generation,” I thought.

So I invited them.

What about some of my artist friends newly-acquired in recent years from Portland? Of course, it goes without saying. I invited as many as I thought might like the show. One man, a comics-fan who has bought work from me in the past and paid me for other work which I have yet to complete, came to my show. It was also around my birthday so he came bearing gifts and never asked how that piece I promised to do for him was coming along.

Here is a partial list of people who I wish could have come to my art exhibit on the 27th:
1. My grandmother with whom I lived for the first 16 years of my life. And the last 16 years of hers. She, more than anyone, instilled in me at an early age a love of stories with pictures.
2. My parents and other family members who have passed away. My mother once told me my work was “ugly” and she was right. But it was ugly in a beautiful way.

3. My biological father whom I never knew existed until last April. From what I have gathered, he liked taking photographs and writing stories. I think he would have been amused.

4. Larry Shell who loves comics and comics people and lives in NJ and no longer drives, but has been a great friend for almost two years now.

5. My editor at Papercutz, Jim Salicrup who is busier than a one-legged man in a butt-kicking contest. Jim has been a very supportive and loyal friend.

6. Mike Judge, who is the only person I ever met who didn’t like Beavis and Butt-Head Comic Book, but is cool anyway.

7. My old boss, the late Danny Crespi who gave me the only real job I ever had.

8. Vladimir Salamun, a friend of forty years and the best man at our wedding who I haven’t heard from in about a year despite repeated attempts to reach him. (I called him after I wrote this and we had a nice chat.)

9. My Pal Philip Felix, former Kurtzman assistant and letterer who doesn’t like to drive long distances.

10. The late great writer/editor, Archie Goodwin who came to see my art exhibit in 1980 and told me that people don’t like funny fine art.

11. Yukie Ohta who grew up in the neighborhood in Manhattan where I exhibited my work to the public for 12 years and was nice enough to include me in her efforts to preserve the Memory of the neighborhood when it was an arts community.

12. Art Dealer Barbara Toll, who gave me my first show in New York and told my ex, “He has a great mind.” My ex wasn’t interested in me for my mind.

13. Martha Wilson, of Franklin Furnace, a woman with a vision and an artist with a following.

14. Kyle Baker, the greatest cartoonist in the world and most creative person I know in comics.

15. My Buddy Jack Morelli, former Marvel Bullpenner with great creative talent and father of two and husband of one and friend to many.

16. Joey Cavalieri, who took an interest in my early work and encouraged me to give comics a try.
17. Herb Trimpe, who liked to draw and fly open cockpit airplanes. He died earlier this year. Of natural causes.

18. Mark Chiarello who lives in California and likes it.

19. Harvey Kurtzman who looked at my cartooning in 1982 and smiled sweetly but said nothing.

20. Jack Davis who was a huge inspiration to me as a young artist and only died a month or so ago.

21. Nina, our maid, who, when I was a kid, told my parents, “Ricky’s going to be an artist when he grows up.”
22. Jack and Irene Menotti, two old people who lived in the same building as The Barking Dog Studio in New York City. I would love to know what they were thinking when they looked at my artwork in those days. I should have asked them.
23. Joe and Jewel Brooks, two old people who rented a room to me for a dollar a day when I was in the army and took me with them to church every Sunday, after making me breakfast and treating me like the son they never had.

24. Paul Trusiani, my father-in-law and a real humanitarian, who died last year and who was never anything less than a great person in all circumstances.

25. My two biological siblings that passed away many years ago at 50.

26. My first cousins, Kathryn Braswell Hochman and her sister, Becky Braswell Botts who live way down in Dixieland.

27. My childhood friends, Allen Joyce and his brother Jim Joyce.

28. My old Buddy, Ray Anderson, who used to give me a ride to summer school in his Model A Ford and introduced me to my first girfriend.
And last and by no means least, all my old friends at Marvel who put up with me.

You know who you are.

One thought on “Weirdos, Zombies, Gangsters and Captain Kangaroo”