New York City in the 1970’s had the most wonderful garbage.

I couldn’t step outside the door in my neighborhood– or walk anywhere– that I didn’t see something interesting which someone had thrown away that I wanted.

Old wooden chairs and metal work tables were forcibly dragged back to my studio. Lamps that needed fixing, old wooden crates and antique steamer trunks that looked as if they had come through Ellis Island got a free ride home on my shoulders.  Hundreds of carved wooden forms for hats from factory buildings in the area suddenly became my property. Factories that had long ago ceased production, and, after years of hibernation, were now being cleaned out and converted to artist’s lofts.

It was in the old Cast Iron District, bordered on the North by Houston Street and on the South by Canal. To the East by Broadway and on the West by West Broadway– a wide cobblestone street, which, in the days when the factories were alive and noisy with work, had been called Laurens Street, and up the center of which, until forty years before I lived there had run the Sixth Avenue Elevated.

I can’t remember exactly where I found the mannequin legs, but I know I didn’t buy them.  Someone probably threw them out and I brought them home. After all, what man doesn’t admire a nice pair of legs?

At first, I didn’t know what to do with them, but I had recently bought a 35mm camera, an Olympus OM-1, single reflex, and it wasn’t long before I took to the street with my new legs and began taking black and white photographs of them. As fate would have it, it wasn’t long before I chanced upon a Styrofoam® pellet spill of sizable proportions. There was a slight summer breeze and the slow movement of the tiny white pellets across the sidewalk and out into the street reminded me of a lightly falling snow. I put the legs down in the middle of the “snow” and backed up and took a few exposures. It just so happened that the mannequin legs were of the type where there was a slight bend in the “ankles” as if the legs were standing on their tiptoes. Perhaps they had originally been used in conjunction with high heels, who knows. At any rate, I placed them among the windblown pellets, stepped back, set the aperture and shutter speed and released the shutter, deliberately framing the image so as to resemble nothing more than a naked woman standing on her tiptoes in a snowstorm to perhaps kiss the lips of an invisible stranger.

There were other photos, too, like the multiple exposure of the legs, now wearing my old black combat boots, ascending a staircase–sort of a “reverse” homage to Marcel DuChamps’ “Nude Descending a Staircase”, an image which was etched into my mind from childhood days spent in idyl study of pictures in art books and in The World Book Encyclopedia.

But the one image that stood out from all the rest was taken from the sidewalk opposite the disembodied legs and boots against a blue wall near the Southwest corner of West Broadway and Grand Street.

In the picture, there was a sad old woman walking by in a heavy coat. I had seen her before. She lived with her male companion in a tiny upstairs apartment in my building and the pathetic creature wore the same heavy coat whenever they ventured out, which was infrequently, as I recall. I have reason to believe she was probably unclothed except for that coat, as I had seen her once suddenly stop, and unaccompanied on this instance, stooping slightly, she urinated directly on the sidewalk before resuming her liesurely sojourn to wherever it was she was headed.

The Legs in Boots were carefully placed near the wall. The old woman held a crust of bread in her hand, which she was eating as she passed, seemingly unconcerned with the possibility that she might be about to become part of my photograph. I snapped a few quick pictures.

Then the man walked by.

I could not have been happier with the image. 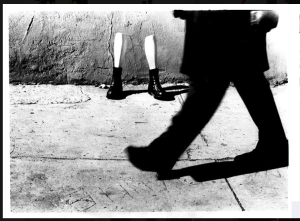