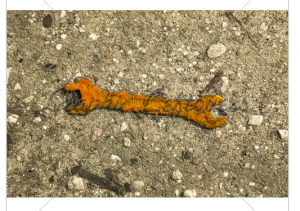 Years ago, having nothing better to do, I put on even older, shabbier clothes than usual, grabbed a small shovel and drove my green station wagon down to a certain dead end street on the outskirts of Portland, Maine.

A few weeks earlier, an older gentleman I had struck up a conversation with at a yard sale, told me that particular street was a great place to find old bottles.

A century ago, in the days before there was any such thing such as indoor plumbing, people used to throw bottles and other items they no longer wanted or needed down into the privy or into the woods behind their houses. When indoor plumbing became commonplace and the privy gradually vanished– but before there was municipal residential garbage pickup– people would often carry their unwanted items and other refuse down to the end of the street in a burlap sack or in a wheelbarrow and just dump it down the hill. And there it would remain, hidden from view, unseen and unloved.

Until I came along.

Gradually, over the ensuing decades, the rain would fall and the wind would blow, and the soft wet ground would swallow up the old worn out shoes, the little lead soldier with the broken arm, the teacup with the chip in it, the glass marbles that the boys no longer played with and the porcelain doll with the blue ribbon in her hair who was missing an eye.

Then, each Spring, the weeds and the underbrush and the blackberry vines would come back in again and thicker each year, until the birds–who were among the last to see the little one-eyed doll–and the crickets and the little furry animals on four legs no longer had to make their way through the maze of broken bottles and rusty pots from Grandma’s kitchen. It all lay underground unseen and forgotten. And the people who had discarded it grew old and died or moved away and their wooden houses just up the street came to be occupied by successive generations of families with no knowledge of or connection to all the buried treasure at the end of their street.

It was there– in the dirt, only eighteen inches below the surface, where I found the wrench. It was made of steel and heavily rusted.  It was long and slender with a small round opening at each end. At one time, it had been sleek and smooth and silver, but no longer.  Now it was orange-brown and heavily pitted. Whatever name and markings it originally had on it had long since vanished. As a tool, it was totally useless–but it was a thing of beauty to me. So, I picked it up, put it in my pocket and took it home.

Going through my possessions in preparation for a move today, I came across that rusty old wrench in a wooden box in the basement. I picked it up, held it in my hand and looked at it. It truly was a thing of beauty. I didn’t think I could keep it. I can’t keep everything. I have too many other things already. I wondered what to do with it. Throwing it away, after what it had already endured seemed out of the question.

Suddenly, I remembered a friend I had made in the last few years, a fine gentleman in his eighties. He arises each day before the sun comes up, and can often be found out in his garage, alone, happily working on the restoration of one or the other of a half dozen different antique automobiles he owns and drives and all of which he has restored from the ground up.

I visited him a year or so ago and complimented him on one of them–a beautiful, new-looking green and yellow 1928 Ford roadster. He told me that he had bought the car for a small sum of money from a farmer’s widow in Maine. The vehicle had sat in the farmer’s shed for fifty-odd years and my friend had tried to buy it–but the farmer wouldn’t sell. Eventually, the farmer died and then the shed died and collapsed onto the vehicle. Over time, and no longer under the protection of the shed and exposed to the elements, the old car had sunk down into the mud up to its axles. The wooden parts of the frame and the wooden spokes of the wheels had rotted away. What remained of the car had become a pile of rusty old parts.

Suddenly, I decided what to do with that rusty old wrench of mine.

I’d wrap it up like a birthday present and mail it off to my friend in Maine.

Surely he’d know what to do with it.