He had been killed in action in VN before he turned 21.

My military detachment from Ft. Sill, Oklahoma, consisted of fifteen uniformed soldiers in dress greens. Six wearing white gloves to carry his flag-draped casket from the hearse to the grave, and a seven-man firing party carrying M-14s firing blanks to honor his sacrifice with three volleys of fire to comprise a 21-gun salute. There was an NCO to command the firing party so that their volleys were in unison, Sgt. Tom Conway of Tampa, Florida and one lone bugler, PFC Hampton (Lionel Hampton’s nephew) to blow taps as the American flag which had draped PFC Harkins’ casket was being folded. The bugler was strategically hidden behind a cypress tree off in the distance.

PFC Harkins’ next of kin was a five year old girl, his daughter, to whom the folded American flag was to be presented at graveside.
It was a sunny but brisk November morning and we were gathered together in a humble little cemetery on a bleak hillside overlooking a highway on the outskirts of Texarkana, Texas. As the ceremony began, I remember I noticed a truck, an 18-wheeler, speeding along in the distance, the moan of its diesel engine seemed to fit the occasion. As the white-gloved soldiers carrying the remains of PFC Harkins inside the silver casket reached the grave and set him down gently for the last time they lifted the flag and held it tight at waist level, while a Southern preacher drawled a soulful and brief prayer.

I thought it strange that the cars and trucks down on the highway did not stop, but continued on their way, oblivious to the scene that was unfolding before our eyes. It seemed to me that the whole world should stop.

The preacher concluded his remarks, closed his Bible with a dramatic thump and took one step back. This was the signal  to begin to fold the flag. My men, who had spent a week training for this day, very smartly folded the flag and then the Senior Pallbearer, Specialist Bennie K. Stephens of Little Rock, Arkansas, executed a left face took several steps forward and bent down with the American flag in his upturned and white-gloved hands. He spoke softly to the little girl who was seated nearest the freshly-dug grave of her father.

“Please… accept this flag…. on behalf of a grateful nation….”

For a brief moment, the little girl looked up at him as if unsure of what to do. Then she reluctantly took the flag and held it up against her chest as if trying to keep warm. It struck me as much the same way that her dead father must have surely held her when she was a baby only five years before.

The moment was shattered as the firing party fired the first volley of the 21-gun salute. It startled everyone, myself included. It drowned out the whir of the tires from the passing trucks far below. It drowned out the thoughts of the little girl and the few who were gathered there who had known PFC Harkins in life.

When the last volley of seven shots had rung out and echoed off down the hill past the roadway and the barbed wire fence beside it, SP4 Hampton began to slowly blow taps on his golden trumpet. And the few gathered there who had known Pfc Robert C. Harkins in life began to softly cry as the funeral director released a lever and began to slowly lower PFC Harkins into his own little corner of America.

Off in the distance, another truck whined down the highway. The wind picked up and I felt a shiver run through me. Suddenly, PFC Harkins’ daughter began to cry out, “Daddy….Daddy…Daddy…..”

….she cried “Daddy” over and over again, as the top of his now bare silver casket descended forever from view.

I thought about how he would not be there for her next birthday party… or to tuck her into bed… or to read her a story. He would not be there to watch her in the school play or see her graduate from high school. She would have no father to give her hand in marriage–or for any of those things in life that we all live for.

I wondered what kind of memories she would have of her father that she might carry with her as she lived out her life.

That little girl would be 50 years old now.

I have often wondered what kind of guy PFC Harkins was. I wondered what his life was like, and where his wife was. I have thought about him many times over the past 45 years. Today for the first time, I saw his face.

I think it’s good to remember that there are many men and women like Robert C. Harkins who have served in our military and sacrificed their lives for our country.

We owe them all a debt of gratitude which we can never repay. 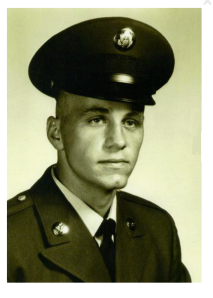 Let us never forget them.

4 thoughts on “Reflections On a Windy Hillside”