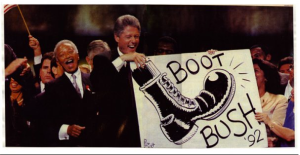 I had been doing drawings of boots on blank matchbook covers and selling them on the streets of New York City for about a year.

The drawings of the army boots always sold well and I drew the image so many times I got quite good at drawing it very quickly. It was the same sixty-three marks over and over again. Your hand gets trained by your brain very well after a while. And you can draw it on automatic pilot.

One day I was sitting in my little chair on the street corner cranking out another boot drawing when a couple of Japanese tourists stopped to watch. One turned to the other and said, “Look! It’s as if it’s appearing by magic.”

A year or so later, on a perfectly lovely blue-sky day in early June of 1990, I left my dogs, most of my possessions, my top floor loft in SoHo, and my wife and moved into a 2nd floor loft around the corner and down the street with a friend.

Or rather my wife left me. She just stopped coming home.

I think my friend could see how miserable I was and offered to let me live with him for a few weeks until I could find a new place. He worked in an office and I was alone for most of the day.

I could have drawn a lot of different things with a sheet of foam core and a one-inch thick black marker, but for one reason or another, probably because I had done so many little drawings of boots I decided to draw a big black army boot.

It was the kind I had worn when I was in the service twenty-something years earlier. I was very familiar with it. We polished our boots and laced them up, just so and placed them under our bunks in precisely the right location when we were sleeping. We took good care of those boots because we knew they would take good care of us if the going got rough. But for me, anyway it never did. It only got rough when I got out of the army.

When I was discharged, about the only thing I kept were my boots which I knew would serve me well, since I had recently bought a motorcycle–and it wasn’t the kind you ride wearing flip-flops.

And after a couple of years, when I moved to New York City I wore those boots. To a certain extent, moving to Brooklyn in the early 1970’s made me feel like I was entering a war zone, and I depended on my boots to protect me, at least where my feet touched the ground. There were good reasons why you didn’t walk the streets of Brooklyn barefoot in those days.

Besides, there is a long history of boot imagery in cartooning. Someone in a cartoon was always catching a boot when they were fishing or getting a boot thrown at them.

I suppose if I hadn’t been in the army I wouldn’t have been so interested in boots. They are black, after all, and when you work with black ink on white matchbooks, black things almost beg you to draw them.

When I first began drawing on blank matchbook covers, I had drawn shoes from an old catalogue I’d found somewhere. But soon, I gravitated toward drawing boots.

There is something very no-nonsense about a boot. A boot doesn’t try to be a shoe, a sandal or a glass slipper, or to be anything else other that what it is.

That drawing of the boot came out very well and when my friend came home from work that day, I showed it to him. He seemed suitably impressed. You might even say he even took a shine to it. I liked the surface of the foam core, its light weight and the feel and smell of the marker as it moved smoothly across the board. I thought to myself after I had completed the drawing that I would like to do more drawings like that. I wouldn’t have to wait too long.

In a month or two a friend who owned an art gallery in New York asked me if I wanted to have a show of my work in his gallery. I jumped at the chance and immediately went down to Pearl Paint on Canal street and bought a dozen 4’ X 6’ sheets of one-inch thick foam core and a dozen I” thick Sakura markers.

By this time, it was November and I had moved into my new apartment on 28th Street, between Sixth and Seventh in the Flower District. I secluded myself for four days and produced a series of a dozen large drawings of ordinary objects for my upcoming exhibit. I called the show, “Twelve Ugly Drawings”. My mother had once told me, “Ricky, your drawings are ugly. No one wants to look at ugly drawings.” I was determined to prove her wrong and I was even prepared to mount an exhibit of ugly drawings in New York City to do so.

One of the drawings in that exhibit was an army boot, although it didn’t look nearly as good as the other drawing of a boot which I had done a couple of years before while staying at my friend’s loft. That drawing hung on the wall of Tootsi Plohound in Prince street for months. But this time, owing to a major miscalculation on my part, I made a hasty decision to work in the vertical format, which meant that the upper section of the boot was aligned with the long axis, or height of the support– while the part that one’s foot fit into would up being too short, and had to be fit into the short axis of the width. It looked like an orthopedic combat boot. While many people looked at it, no one wanted to pay $500 for it. It was ugly. My mother was right. Mothers know things.

In October of 1992 Bill Clinton was challenging George H. W. Bush for the presidency. The convention was being held at Madison Square Garden, around the corner from my studio.

I was at home working on something when my future wife’s younger brother came into town to attend the convention. He stopped by my place and asked me if I could draw a picture of Clinton and his running mate, Al Gore arm-in-arm and write the word “EXCELLENT” in big letters over their heads.

That kind of pissed me off. I knew I would have to do that drawing, whether I wanted to or not, because I was going to marry his sister and if I didn’t do it, I’d be hearing about it for the rest of my life.

So I knocked it out and he seemed happy with it. As he was leaving, he glanced up and saw the drawing which I had done a couple of years earlier of the army boot. He stopped in his tracks. “Can you do that drawing on the other side of this placard and write “Boot Bush” on it?

Now I was interested. I had done that drawing so many times I literally grabbed the board out of his hands and dashed out the drawing of the boot in a few minutes. He was happy and left saying, “Watch for me tonight on TV.”

I had just gotten in from walking the dog about 10:30 that night when the phone rang. It was my future wife’s mother. She said she had “…just seen Bill Clinton on TV and he was walking around holding my sign.”

Apparently, my future brother-in-law had shown the side with the two smiling candidates on it and Clinton had spotted it from the podium. He shot my brother in law a firm smile and a thumbs-up. And then my brother-in-law, who can apparently read lips in a packed convention hall, saw Bill Clinton say, “I want it!”

So, my brother-in-law, a large man with an even larger sense of purpose began elbowing his way to the front.

When he was close to the stage, Bill Clinton reached down and took the sign and held it up for everyone to see. All the other dignitaries on the podium laughed at what they saw on the back of the sign, but Clinton was mystified.

He had only seen the two smiling candidates. He had not seen the “Boot Bush” part on the back.

He pulled it down– turned it around– saw it and looked really embarrassed.

That’s when the great photo-journalist Richard Thompson, snapped the picture. It was a decisive moment, for Bill Clinton, for George W. Bush and most of all for me. That picture was on CNN, CBS News, was picked up by the Associated Press and distributed all over the country and was a double-page spread in U.S. News and World Report. I thought, “Wow….the future president of the United States likes my work….maybe NOW my mother will like my work….”