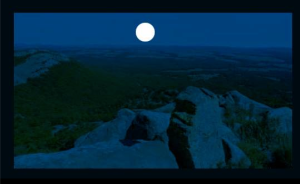 With no map, and no sense of the direction in which to proceed, we picked our way along in the moonlight, across field and stream, between boulders and past dead, gnarled and weathered trees, guided only by our mutual determination to put as much physical and psychological space as our already exhausted bodies and minds would allow, between us and the place we had just “escaped” from. It was now clear to me, that everything so far, had been a “set up”, to insure that all– or most of us, would be captured– and then after subjecting us to a fair amount of degradation, we had been allowed to escape into the wilderness and find our way to the “partisan point” and reunite with the others for the last leg of our ordeal.

Very little conversation passed between my contemporary and me as we trudged on in the darkness, with only the full white moon and billions of beautiful silent stars to light our path. I kept an anxious eye on our surroundings, wary of being recaptured and sent back to the camp. After an hour or so, it seemed increasingly unlikely that we would encounter any other human beings and so I began to relax a little and we slowed our pace somewhat, although we did not stop. I, for one, had no idea whether we were going in the right direction or not and was afraid to ask my companion for fear he would admit that he did not know. I preferred not knowing. Walking along in ignorance was better than embracing the reality that we were lost.
Around midnight, we heard voices and then realized the voices belonged to two other officer candidates. Now there were four of us. This buoyed my spirits tremendously and put a spring in my step. It was almost like fun as we began to ascend a rocky out-cropping which eventually led us up and over a small mountain. Climbing up and jumping from one large boulder to another, following the blue grey ghostlike figure in front of us, we crested the ridge at the top in the bright moonlight. The moon and stars never shone so bright as they did from the top of that ridge. Looking down from the top, way off in the distance, we saw the tiny yellow headlights of the trucks that were waiting to take us back to the barracks. A most welcome sight.

In another forty mintutes, we had run and tumbled down the mountain in the darkness– and shortly thereafter, had reunited with our fellow candidates to exchange stories. We were all dirty and caked with mud. Uniforms were torn and candidates were limping. It seemed everyone had been captured and taken to the mock POW camp except for this one officer candidate. He had been one of the ones with a map and compass.

As he told the story: ”In a few hours, I made it to the partisan point!”

“Then what happened?” we asked.

He continued: “They congratulated me and they were saying, it was AMAZING that I was the ONLY one who had not been captured. Apparently, this had never happened before in all the history of the program going all the way back to World War 2…. ”

“Then they told me to come with them by jeep back to the POW camp and tell the camp commandant that I was the first one ever to make it to the partisan point. After about an hour or so, we arrived at the camp. They got on the radio and told him I was coming. When the Jeep pulled up he was waiting for me at the front gate.”

“And then what happened?, we wanted to know.

“Well…I went up to him and said, I MADE IT!! I WAS THE ONLY ONE WHO MADE IT TO THE PARTISAN POINT!!”

“Well, he just looked at me for a minute–and then he said……CRAWL PIG!”