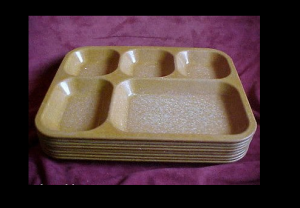 “….most officer candidates took all this harassment quite seriously. I know I did. That’s why, one day, I was quite shocked, when I noticed the candidate directly across the table from me, Candidate Curley, upon whose nametag, my eyes were permanently fixed, began casually dog-eyeing the mess hall.

“CANDIDATE CURLEY….DO YOU WANT TO BUY MY MESS HALL?”

Candidate Curley: “SIR, DO YOU HAVE CHANGE FOR A QUARTER?

Then we were suddenly given the command “MARCH ORDER” by the TC.

All the trays had to be passed down to the end of the table where the Assistant Commandant sat while the two “gunners” on either side of him scraped all the food, which had been barely touched, into a big pile on one of the trays. That was the end of that “meal”. It was worth it, though, to see one of my contemporaries finally stand up to a middle classman.

I don’t know what happened to Candidate Curley. I’d imagine he did a lot of pushups after that. I assume he graduated with his class and eventually became Lieutenant Curley. I hope if he was sent to Vietnam, he made it back in one piece, and lived to be a happy old man with six grandchildren to whom he could tell that story.

I don’t know if he died in the Vietnam War a hero. All I know is, that day, he was my hero.