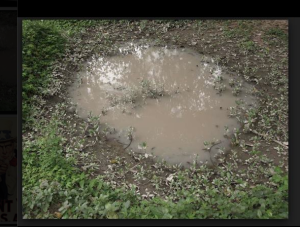 When I was a boy growing up, there is little doubt that my mother had been overly protective of me. No doubt my mother knew me better than I knew myself, or at least well enough to know that it was probably not a good idea to let me have some of the things I wanted really badly, like a BB gun– and later on, when I turned 16, a car. I didn’t even get driving lessons until I was 18 and had graduated from high school. Other kids I knew started learning to drive at 14 or 15 and had their own cars by 16. Other kids I knew had guns. And they weren’t afraid to use them.

“Manson” lived two houses down. He was a few years older than I. One day, Harry, (a kid Manson’s age who lived between us) Manson and I went for a “hike” in the woods to the Casey Canal. The Casey Canal was a drainage ditch in a wooded area of town that snaked through Savannah and was one of the “wild places” kids could go unsupervised. I relished the invitation. It sounded like fun. I liked playing with the big boys. Manson took along his .410 shotgun for protection. Arriving in the woods near the canal, we paused beside a large mud puddle. Manson suddenly leveled the shotgun at me. Then he lowered it and pulled the trigger, splattering me from head to toe with mud. Then Manson laughed a laugh like only Manson could. Manson’s mother had died when he was only three. Clearly her death had been no laughing matter and had left Manson terribly wounded.

Frank, the “bad” kid who lived behind us, was five or six years older than me, and by age nine, had shot out every window on the south side of our house. Well, actually, he really only left a circular “hole” in the screen and glass windows of my parents’ and grandma’s bedrooms, a typical BB gun not really being powerful enough to completely shatter the glass. Frank’s father had died when Frank was just a young boy and his baby sister, Ann, his primary and most convenient victim, was even younger. When my mother spoke to his mother about the windows, her response was, “Oh, my Frank would never do a thing like that.” It was common knowledge that in fact, Frank was indeed spending much of the time doing things like that– and a lot worse. I was afraid to go out into my back yard if Frank was in his. I don’t think he ever actually spoke to me. But if Frank saw you, he became the hunter and you were his prey.

Harry, the boy who lived next door had both a BB gun and a .22 caliber rifle by the time he was ten. Although he never pointed either of them at me or actually shot me, like Hank, the boy who lived on the other side of me, did, Harry did use his BB gun–and later his .22 rifle– to shoot every bird and squirrel that was foolish enough to come within range of his bedroom window. Frequently, when I would go out the back door and into our back yard, I’d hear the crack of his .22, and look over in the direction of his house just in time to see the barrel of the rifle being slowly withdrawn back through his bedroom window.

In fairness to my father, I will say, that one day when I was nine or ten, and probably after much pleading and whining on my part, he did take me out into the back yard just once– and together we shot several BBs at a glass milk bottle which he set up on the back fence. Just once. That incident only served to whet my appetite for the forbidden thrill of destructive firepower.

Thus, within a few short years of being denied a BB gun and the keys to the family car, I found myself in the United States Army, firing an M-14 rifle, an M-60 machine gun, a 50 caliber machine gun, an M-79 grenade launcher, a Browning automatic rifle, a rocket launcher, a .45 caliber automatic–in fact, every light weapon in the infantry’s vast arsenal and driving everything they had– on wheels or tracks– from a jeep to a M48A1 tank.